Progress is an imperfect process. It is full of uncertainty and filled with mistakes. Commitment to an objective means committing to the imperfect progress of getting there. Movement towards a meaningful and valuable goal does not follow a steady, rising scale of improvement and forward momentum. It is up and down, fast and slow, advancement and setback, wins and losses. Detach completely from any desire for steady, trackable progress as you go.

Never allow yourself to expect perfect or even predictable progress because it is always imperfect and unpredictable. Don’t wish things were different than they are. Get better at responding to things as they are. 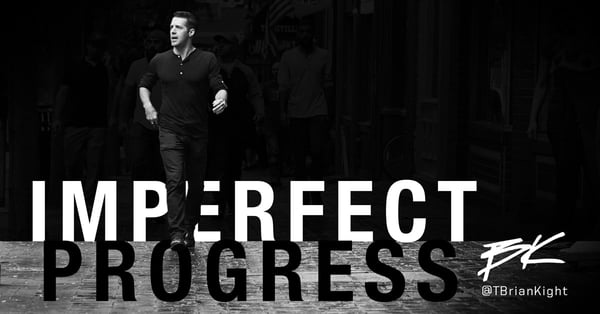 Expand your perspective to a higher-level. People get so committed to short-term progress that if it doesn’t go well early, they get discouraged and stop all progress. Businesses do the same thing. If the first six months of a culture effort don’t show much progress, they take it as a sign they’re not on track and either scrap the entire thing or it just dies out.

Does it matter where you are in six months or is it more important where you are in two years? So what if it gets worse six months from now, keep going! For the next few months you may do well, followed by a month of struggle and then six months of confusion and frustration. Keep going! You don’t need progress to be consistent. You just need it to happen eventually. You’ve heard me say it: you’ll get there when you’re good enough.

Attach yourself only to two things: (1) work at it every day; and (2) imperfect progress on the macro scale. Because in the short-term you may lose. But in the long-term you will win.

Subscribe To Do The Work: Daily Discipline from BK

Imperfect progress is directly connected to enduring discipline. Some of discipline’s value is in...

You’re not perfect. So what?