<< Back to Feed
Truth Reflections

The Defining Moment Of My Life

I wish I could have kept the final chapter of this story shorter. I did my best to express the truths of my experience that matter. Each word feels necessary.

My last few tears fell as the sun sank below the waves on the horizon. It was mid-December. Time to accept that I had no shot of getting into school that semester, which started in January. I was at least eight more rudderless months away from what I wanted most in the world.

There’s always something relieving about sharing my deepest pains with the ocean. It’s so big and endless that I feel like it can handle my heaviest emotions when nothing or no one else can.

The ocean didn’t care about me at that moment but it also didn’t reject me or judge me for my mistakes, even when I did. I watched the steadiness of the tide. It almost seemed to say, “You’ve made your mistakes. But that’s done now, isn’t it? Everything is still moving. Moving forward. Forgive yourself and get on with life.”

I started exploring real junior college and university transfer options for next fall. A few days later my old college football coach called me. We hadn’t spoken in over a year. Not since I left the team and dropped out of school.

He asked how I was and what I was doing. I told him the truth. I was lost. I was stuck. I was sad. He asked what I was going to do. I wasn’t sure yet.

Then he extended me an offer to return to the College of Wooster and rejoin the team. He said he believed in me and would be glad to have me back if that's what I wanted to do.

It was the furthest thing from what I wanted to do. I had no interest in going back to Ohio. I tried that already. No thanks. It was a kind offer but was quite literally the last place I wanted to be. I politely declined.

Later that week my mom and I went out for lunch and we talked about my future over burgers. She said, “Tell me all the options you have for the next year.”

I walked her through a list of things I’d researched and at the end added, “. . . or I could go back to Wooster.” I chuckled. So did she. As I lifted my burger up for the next bite my mom said, “Well the answer seems pretty obvious to me.”

I froze. She was right.

If I was unwilling to move back to Ohio for four years, face the environment I ran from, and do something worthy with myself, then I wasn’t the man I thought I was. The truth of the realization washed over me in an instant. It was so obvious. So simple.

This wasn’t a decision about school or sports or career. It was a decision that would define the kind of person I really was.

I set my burger down without taking a bite. I knew what I had to do. I picked up my phone and left the table without saying a word. I went outside and dialed my old college football coach. Straight to voicemail. All I said was, “I’m in. I want to come back. Tell me what I have to do.”

Little did I know that wasn’t what my mom meant when she said the answer seemed obvious. She meant a different option. I don’t even remember which one. One that didn’t send her son back to the other side of the country. I appreciated that. But I knew what the real answer needed to be.

24 days later I was back on campus in Wooster, Ohio attending my first college class in over 14 months.

If there was a moment I became a man, it was that decision I made at lunch eating cheeseburgers with my mom. It was the moment I decided who I was and who I was going to become. It was my defining moment.

Communication is spectacularly complex. Perfecting it is impossible, but simple disciplines, as... 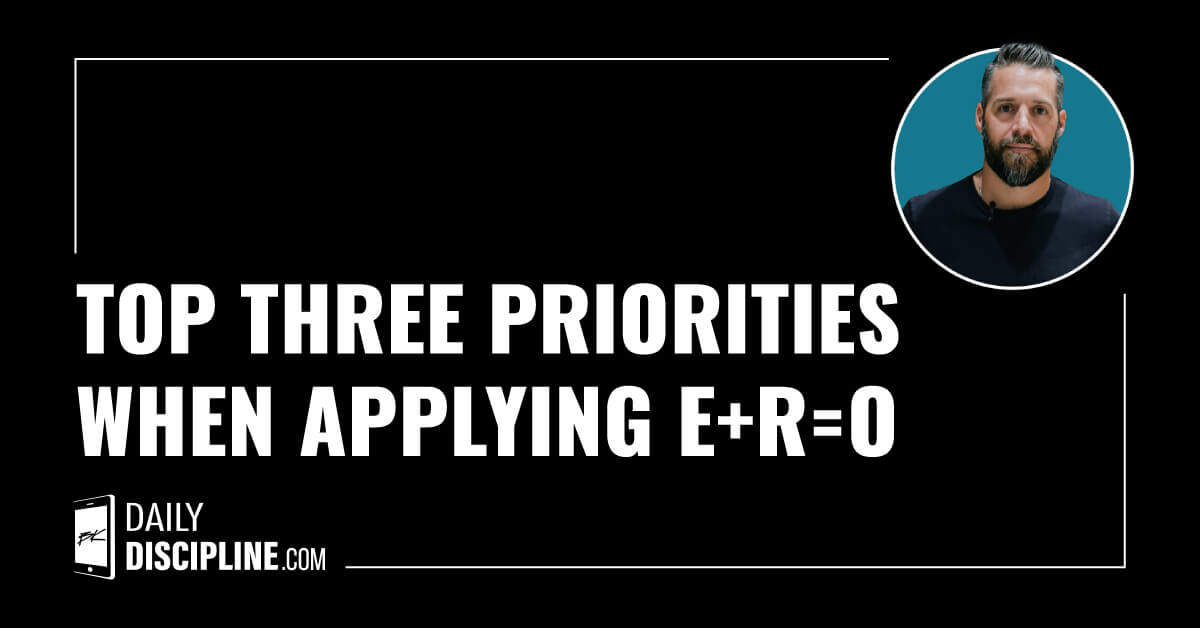 E+R=O is deceptively simple. In my experience, the most valuable tools are the simple ones that...