<< Back to Feed
Fear

A Lesson On Fear From A 5-year-old

Yesterday was our son’s 5th birthday. We celebrated hard. Five is a big deal. I don’t know why. It just is. I don’t make the rules.

Like all kids his age, he is navigating his emotional development. We work hard to give him good structure and plenty of freedom to explore for himself. He’s encouraged to try hard things, even scary things, and struggle. We don’t mind at all if he fails or loses. What we want to feed into him is a willingness to try and discover.

The day before his birthday my wife and I took him to an outdoor adventure center for ziplining, kayaking, and ropes courses.

The first adventure we tackled was a 60-foot climb up a pole with metal rungs, wearing safety ropes and harnesses, to a platform we would jump off and gently freefall to the ground. He climbed one pole while I climbed another and my wife watched from the ground.

Looking up at the height of the pole I expected my son to show signs of fear and hesitation. There was none. Just stoic focus. I couldn’t tell whether he wasn’t afraid or was just hiding it well. The guide strapped him in and up he went. He on his pole and me on mine, we matched each other step for step.

He didn’t look down until he was past the halfway point. Just for a second. Then a few more steps. I could see his little arms getting tired. The rungs were getting further apart and harder to reach. I watched his face as he suddenly realized the position he was in.

45-feet off the ground. Not fully understanding the rope safety system that protected him in case he let go. Afraid to make another move.

He looked evenly across at me and said, “Dad, I want to be done.”

“Alright.” He stretched out for the next hold and pulled himself up. “Ok now I’m done.”

I could see the fear closing in on him, but he had to try. “You and I are both up here together,” I pointed out, “so let’s each take another step up at the same time. You and me. Let’s go together.”

We both pulled ourselves up another rung on our respective poles.

Clinging tight to the metal rungs and through tear-filled eyes he asked, “Can I be done now? I want to go down.”

He told the guide he was coming down and she instructed him to climb down rung by rung just like he’d climbed up. Step by step he descended until his feet were back safely on the ground.

I finished climbing the platform, jumped off, came back to the ground, and found my almost 5-year-old son next to my wife looking dejected. He thought he failed. He was embarrassed.

Not us. We were so proud of him. He started the climb even though it intimidated him and was probably beyond his capacity. He continued to climb even when he was scared. And most importantly, when all he wanted to do was freeze in fear, he accepted a little encouragement and took two more courageous steps up.

Maybe you won’t make it all the way to the finish this time. Maybe this rep isn’t about this challenge, but about stretching yourself for future challenges. Maybe the accomplishment for now is feeling what it’s like to do something challenging on-purpose, maybe even beyond your current ability, when you’re really afraid.

There’s a book I’ve read to my son since he was a tiny toddler called “The Color Monster” that teaches about emotions. The section on fear says, “This is fear. It hides in the black shadows. When you’re afraid, you feel tiny and helpless. Fear makes it hard to be brave.”

I will tell you what I’ve always told my son: Fear doesn’t make it hard to be brave. Fear makes it possible to be brave. 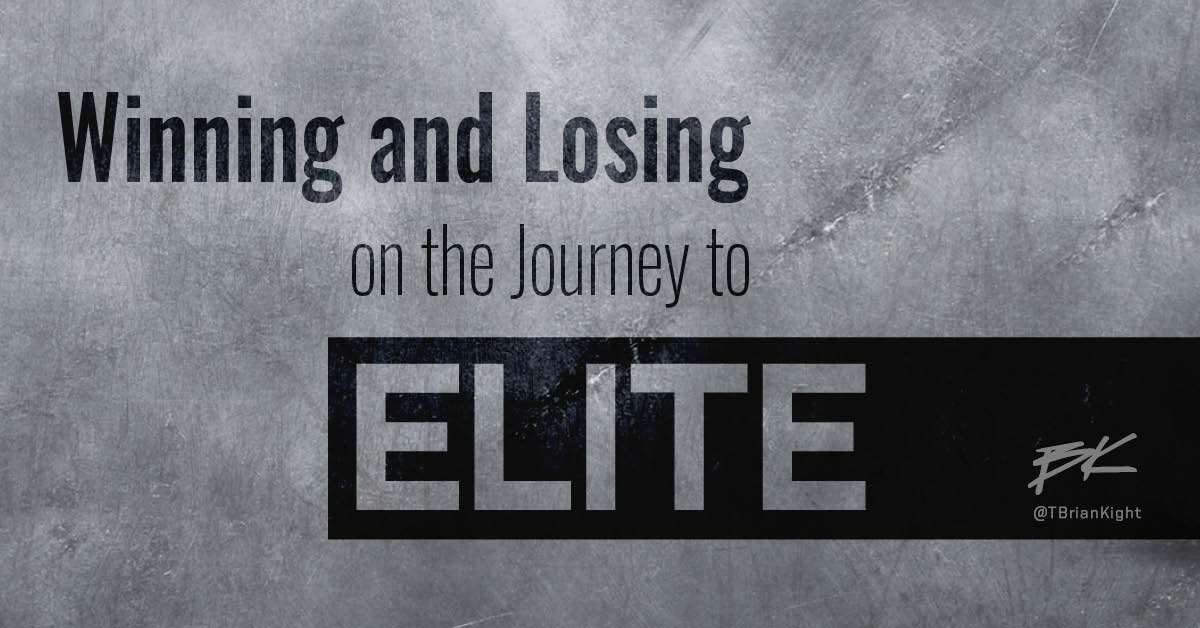 Winning and losing on the journey to elite

I don’t know if you want to be elite, but if you keep reading, I’ll assume you do. If you don’t...